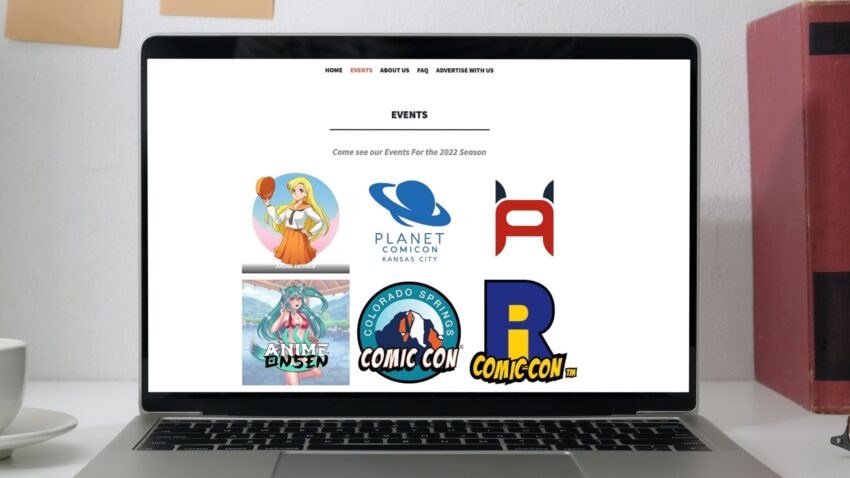 We recently sat down with Dru Girouex, CFO, and Josh Gebbie, CTO, at Pop-Up Lockers, a business that brings lockers to conventions so that people can stash their stuff while they browse the convention or expo floor. They primarily focus on comic conventions, and in 2022, they’ll be at 27 events nationwide with 300 lockers at each event. Here, they’re sharing how they got started, how they’re using Payable to pre-sell locker space, and a few of the funnier moments they’ve experienced on the show floors. (See if they’re coming to your city over on their website at Pop-UpLockers.com!)

What is Pop-Up Lockers?

Dru: We are huge nerds! We travel primarily to expo-style conventions—a lot of comic cons—and we rent out locker space. So what we’re doing is essentially setting lockers up for people to rent in order to store their stuff. While they are on the convention floor or going to events, or going to dance clubs in the evenings where you can’t have bags, people can safely store their stuff. It’s better than leaving stuff just stowed in a corner, or using a bag check where you don’t have any privacy. We heard a ton of horror stories from bag checks at conventions, and because we went to a lot of conventions ourselves, we saw what worked well and what didn’t.

How did you decide to launch Pop-Up Lockers?

Dru: At a lot of these conventions, we were already renting space for our separate endeavor. And because we had that booth, we had our friends and anyone who kind of knew us asking to stash their stuff in our booth, to the point where it was looking like a little mini storage facility. The idea grew from that.

How has it grown since you launched?

Dru: We started off in the November of 2019 using paper forms and PayPal. We’re now gaining traction, we have 27 contracts for the 2022 season. A lot of those are rolled over from the 2020 season when COVID happened. Now that we’re busier, we needed to get more organized, so we figured out how to use Google Sheets to manage our inventory. Then we figured out the Forms to Sheets transition, so we could create a sign up form and manage inventory at the same time, and then we found Payable, so we were able to actually take payments that way too.

How has the Payable Add-On helped your business?

Dru: It’s been a great help for us. We looked at a couple different options, but  none of them really were able to do what we could do ourselves. And Payable helped us get to that point, where we can do what we’re doing, and take payments at the same time.

Had you used Google Forms for anything like this before?

Josh: We had used Google Forms before. But while we were familiar with some of the extensions, we hadn’t seen any that collected payments. When we first started, Drew’s question was, “Can we have people pay right on the form?” And my answer was no, we can’t collect payment information on a Google Form. But then as I was looking around, I found a video on YouTube about how easy it is to set up Payable Forms. That revolutionized it. At that point in time, we said to ourselves, ‘oh, my gosh, we can get pre orders now!’ We experienced a couple hard times where we would travel out to a convention, having spent hundreds of dollars to bring the trucks and all the lockers out there, and then not make enough to pay for gas to get home. We didn’t have a way of collecting money or driving business before we got there. And now with Payable Forms, we can essentially drum up the business so we know that we’re going to be at least this successful before we even get to a convention.

Do you use any other extensions along with Payable?

Josh: We do use another Google Add-On called form Ranger. Together with Form Ranger and Payable, we’re able to create a dynamic inventory system that updates every time somebody submits an application, to update whether or not the locker has been checked in or checked out in order to make sure that we aren’t double selling lockers.

Have you considered switching to another platform?

Dru: I’ve gravitated to wanting to stay on Forms and Sheets because we can add more things to the Sheets. We have our accounting tallies, and we know exactly what we’re making and what we need for taxes, and we have contact emails so if we go to the same event a year later, I can just ping those people again to see if they want another locker.

What was the toughest event you’ve done?

Dru: We actually did the College World Series, a baseball event, which circumstantially wasn’t great for us. But it was a learning experience and I definitely think that there’s growth there. The lockers weren’t the problem: To get the space at the college or with the series, we had to rent a building. That was tough. But we had hundreds of people using the lockers and loving it, because at the College World Series, you can only bring in a clear plastic bag. A lot of people were just throwing their bags away because they weren’t clear, or throwing their coats and raincoats away. We offered the perfect solution for them. We were on the news even! But renting a building in downtown Omaha during the most busy event that Omaha is known for wasn’t the cheapest thing to do.

Any super stressful or weird stories from renting lockers at comic cons?

Dru: We’ve had some crazy stuff happen. Some people don’t understand that we are a paid service. And they think that things should be free for them. It does get stressful, especially when everybody’s up all night. For most of those events, they only get a couple hours of sleep, so people are sometimes grumpy. But the biggest challenge is always getting costumes to fit in lockers. Twice now, it’s been an entire furry costume. So this person went out and made their own massive costume, and that doesn’t fit in the locker. Now, we have extra storage space overflow storage space for that situation. It’s happened a few times—people don’t want to stay in these huge costumes all day! One repeat customer has been at a few conventions and he says we’re a godsend. He comes back at the end of the day just drenched in sweat after spending the whole day in one of these suits and he needs to switch to another costume.

Josh: We’ve also had customers who are like, ‘Oh, I don’t really know if I need a locker, that’s a little too much but I’ll get one locker because I might need it.’ And then they fill their first locker full of stuff that they’ve bought. And then they’re like, ‘Hey, can I get another locker?’ Drew had a guy who ended up with four lockers full, and when the convention was over, this guy had to actually move all the stuff. We enabled this person to buy so much and then he’s like, ‘Crap, I don’t know how I’m gonna get all this to my car.’

Listen to the Be Payable Podcast