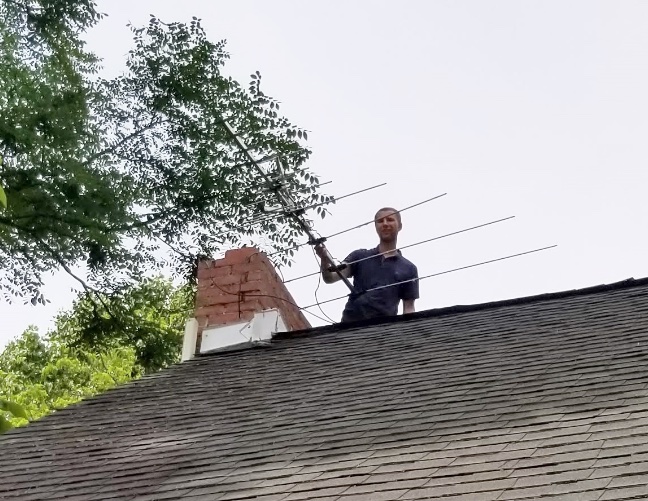 Antennas might seem a little antiquated at first, but consider this: With the right antenna, you may be able to cut the cord forever and save thousands. However, picking the right antenna can mean the difference between great service and no signal. How do you know which to buy? Meet Tyler the Antenna Man. Not only does he have a YouTube Channel with nearly 200,000 subscribers, he has a thriving recommendation-based business where he helps people pick the exact antenna for their location and house setup. Here, we’re chatting with him about how he set up his business, and how the Payable add-on for Google Forms helped him solve the problem of getting paid while collecting the information he needs to help choose the right antenna.

What exactly does Antenna Man do?

Tyler: I have an antenna recommendation service on my website. I run a reception report at a person’s location, take a look at the frequencies in their area based on their address and other factors that their Google Form gives me to recommend a specific antenna for their area, because antennas are very, very area-specific and depend on so many factors. To give you an idea on my Form, it’s not just asking, ‘what’s your name? What’s your address?’ It’s asking what antenna are you looking for? Are you looking for an indoor antenna, an outdoor antenna or attic antenna? How high is your is your house? Is it a single story? Is it multiple story? What’s the tree coverage in your area? And how many TV sets you’re hooking up to? And another thing I asked is they I have them type up what channels they have issues with. And from there, I can determine okay, if they have issues with lower frequency channels, I know that they need an antenna with more gain on that. I need this in order for me to determine what kind of amplifiers needed and all that. It makes it a lot easier to give them what the right antenna recommendation the first time when they just fill out the Form compared to them paying, emailing me and then me asking all of those questions.

It’s easy to see how a lot of people might actually really benefit from this service. But how exactly did Tyler go from being the YouTube guy to turning this into an actual business where people are paying him for his recommendations? And how is he actually collecting all of the data he needs in order to make these recommendations? And of course, where does Payable and Google Forms come into all of this?

The Payable add-on helped solve a major stumbling block in Tyler’s business: When he was doing manual invoicing after providing recommendations, or even beforehand, he often wouldn’t get paid because of the time lag between the Google Form submission and invoicing.

Tyler: The cord cutting revolution is really expanding. The cable and satellite, and even streaming services, are becoming way too expensive. And over the air TV is really growing. My business has grown exponentially. I never thought I’d make a living off just making YouTube videos about how to cut the cord and doing antenna reviews. And then few years ago, I discovered that there was a market need for people to cut not only cut the cord and the videos that I give, but a market where I can give custom antenna recommendations, basically doing antenna consulting for an area.

For the first two years, I would have the people fill out the Google Form. And then every morning, I would go in and manually invoice the people based on whether they want to pay from PayPal, credit card or cash or so I’d have to manually take their name, their their email, put it in Paypal… And there was a there was another issue I had with that: not only did it take a lot of time to do, but some people when they were filling out the Form, they would expect to hear back from me immediately. My demographic is 55+, and to be honest, they’re very impatient. If they don’t hear back from me right away, they give up and they just do their own thing. So about a quarter of the people who signed up for the service were not paying. I would send them this invoice and follow up emails, wasting my time.

Finally, I found a guy on Fiverr who told me about Payable. He helped integrate it into my Google Form and 95% of people pay now. That’s been huge: It brings in more money and saves me a ton of time. It’s so much easier for the people to pay because they can pay through PayPal or they can pay by credit card, and the system is just so easy.

That has to be asked: Why can’t you just go on Amazon or just go to your local audio visual shop and just buy any old antenna? And why won’t that work? So Tyler really explains this.

Tyler: I’m getting people to really cut the cord: you always hear people cutting the cord but what they’re really doing is putting a BandAid on a big problem, which is the endless rate increases of cable satellite, and soon to be streaming services. Look at YouTube TV: when it came out about four years ago, it was $35 a month, and it’s now almost $70 a month. What people are doing is they’re cutting the cord from cable, but they’re going to streaming services because they’re easier to set up. In reality, most people need or want the four major networks. But what most don’t realize is a good antenna setup is the key to getting you those networks for free.

Most people fail when they try to buy an antenna, because especially in the United States, the market has been flooded with junk antennas that don’t work And so people what they do is they’ll buy the antenna that doesn’t work. And then they give up and go back to cable. And what my channel aims to do is review a lot of these antennas. So that way when people are about to, they look up the review, they find my channel, I explained to them that it’s junk, and that you really have to do your research. It’s a science. You really need the best antenna for the frequencies in your area. Do you have mostly high frequencies? Are they strong? Are they fair? Are they weak? Do you have a lot of trees around? How many TV sets are you connecting? There are so many factors that really have an impact on one antenna, That’s what my service helps with.

In addition to offering these personalized recommendations, Tyler also has a huge video channel on YouTube, he has a Patreon account where people can subscribe and donate to him. And of course, he has affiliate revenue by Amazon for the antennas that he actually does recommend.

Tyler: The YouTube channel originally was most of my income. But since the recommendation service has grown, I’ve started using my videos to bring people to it. Essentially, it’s internal marketing, where if you have a platform that people are already on you can market an extension of your business on there. I believe I need to bring people to my channel, and not just push my recommendation service. Because if someone just sees my website, they’re going to say, ‘Oh, why am I gonna pay him $40?’ But if they go to my YouTube channel, they see my videos, and they understand that I know what I’m talking about, then they’re more likely to sign up.

I also have a Patreon, and there, I give people some behind the scenes clips, and I give them my videos a day early and without ads. This is actually a big benefit because if I’m reviewing a product that’s in short supply, it’s not uncommon for me to review an antenna or DVR and within two days, it’s completely sold out because of the influence I have in this market.

It’s easy to see how something like this could turn into a cash grab with affiliate links and advertisers who are just trying to sell their antennas, but Tyler is very particular about reviewing things honestly:

Tyler: Companies want me to push their antennas, of course, but I’m very honest and I don’t sell out. I’m going to recommend the antenna that’s best for a person’s scenario or for a certain area, and I’ll be honest about it. I’m never going to say any one antenna is best for everyone. That said, I do do sponsored reviews. However, the only difference between that and a regular review is that I showcase the antenna and maybe a specific feature that the company is excited about. But within the review itself, I’m not changing the results, and the company won’t see the results until it’s posted.

Listen to the Be Payable Podcast